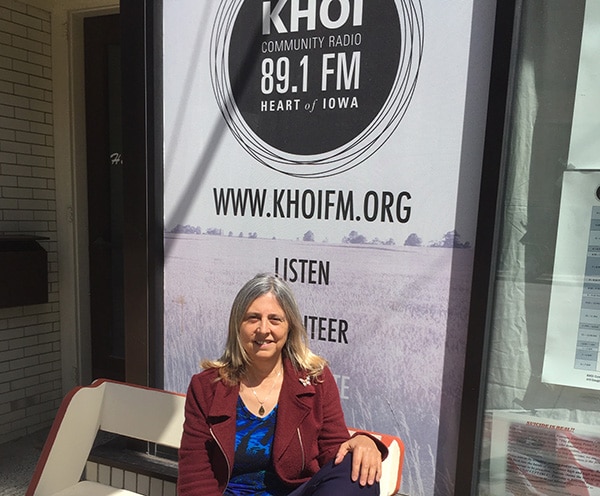 This profile appeared in the June NFCB newsletter. You can subscribe here.

Ursula Ruedenberg has been working in community radio since 2000, when she served as an activist/organizer in the Campaign to Stop the Pacifica Takeover. In 2003, she rebuilt the Pacifica Affiliate program with the help of many community radio leaders around the country and since then, has managed Pacifica’s Affiliate Network of more than 200 radio stations and more than 100 independent production groups.

Since 2010, she led the founding and launch of KHOI Community Radio in Central Iowa. She is KHOI’s Station Manager and Program Director. She is Executive Producer of KHOI’s morning show, Local Talk, and Pacifica’s nationally Syndicated show, Sprouts Radio from the Grassroots, which features community radio production around the world. She built a podcast network nationally for Pacifica Radio and locally at KHOI Radio and teaches podcast/audio production. Prior to her work in radio, Ruedenberg was a mural painter for the City of New York where she led more than 100 community-based mural projects in city parks and recreation centers.

What first inspired you to get into community radio?
I became a fan in the 1970’s, in Los Angeles, when KPFK-Pacifica reported on the Watergate break-in before anyone thought it was a story. I thought KPFK was reaching. A year later, when the story broke in the Washington Post, I fell in love with the media that had told me first. Later, when living in New York, I started asking myself where to find a community of people where I felt at home. I finally realized that the whole time I was asking myself this question, I was listening to  WBAI-Pacifica community radio. So I got involved there, which eventually led me to know people all over the world. Little did I know at the time that I had joined a global community – never have looked back!

Could you share some of your favorite radio memories?
At the end of the Vietnam War, KPFK-Pacifica reported on the “Fall of Saigon,” live. American mainstream media was reporting devastation and panic but I heard celebrating and singing in the streets. It gave me a point of view from the perspective of the Vietnamese people.

Shortly after the US had bombed Belgrade, Yugoslavia, WBAI-Pacifica and Belgrade community radio did a simulcast where they “waged war” on each other over the air, using cartoon sounds as weapons. For example, Woody Woodpecker “attacked” and Fred Flinstone’s “Yaba Daba Doo” “retaliated,” and so on. Of course the American station declared victory and the Yugoslavians contested.

The AMARC international radio conference in Argentina exploded my understanding of the the connection between community radio and global democracy movements. I learned that people in some countries were putting their lives on the line for local independent media. I had lunch with a Palestinian and an Egyptian community radio person and was amazed that we immediately understood each other. I realized this was because of our mutual comprehension, through community radio, of communication as a universally human.

Of course, launching KHOI in my home town of Ames, Iowa is a favorite moment. On 89.1, we replaced a religious broadcaster from Salt Lake City on a translator. We went on the air with the Rolling Stone’s “Sympathy for the Devil.”

Truth is, every day in community radio delivers miracles that fill my heart. It never gets old. Every day, as Pacifica’s Network manager, I get to work with some of the finest people around the world.

KHOI has a remarkable story. How did it come together?
KHOI was part of the 2007 FCC filing window for NCEs. I was involved Radio for People, a national outreach coalition to alert people to the potential for acquiring radio frequencies for community radio. I realized there was air space available in my home town of Ames, Iowa. I found a champion for this, Roger Parmenter, who led the effort, but no one in the area actually knew what community radio was. Eventually, they convinced me to go to Iowa to help them launch the station. KHOI is in downtown Ames in an iconic historic storefront building called the “Ames Pantorium,” built as a dry cleaning business. I learned, the hard way, that “if you build it, you have to run it” so seven years later, I am still in Ames, managing the station until they reach the financial capacity to hire a manager.

It is interesting to build a station in an area where community radio is unknown. Without preconceived ideas or expectations, it’s a proof of concept. New community radio stations face many challenges. In these times of financial constraints and polarized politics, it is not easy. Shared public space is harder to come by and thus all the more important for local community.

What challenges did the station face early on that most people would never guess?
We did not have the funds to build a studio for the first year and a half so we recorded our shows in the building’s industrial space, inside what came to known as “the tent” – a collection of quilts hung from the ceiling to form a small enclosed “soundproof” space (not so much). Politicians and public officials sat in the tent and acted like everything was normal – never raised an eyebrow or said anything.

Our building is next to an alley with several bars on the other side, so for the first year and a half, the sound of beer trucks being unloaded was an integral part of the KHOI airwaves’ sound.

Are there any particular ways you have found to best serve your local audience?
In these polarized times it is valuable to present various points of view so people who disagree can understand each other better, when they don’t agree.

Being in Iowa, we interview the many presidential candidates who descend on our state in anticipation of the Iowa caucuses. It’s a pressure-cooker.

We have a music scene in town so we hold monthly concerts by local musicians in the station and broadcast them live.

We have a morning show that explores the people, stories, and events in Central Iowa. It’s the virtual living room.

How do you stay motivated doing the work you do?
The work is relentless, but it is not hard to stay motivated because communication is a never-ending fountain of joy, revelation, and spectacular moments. It feels like life, itself, and the next day, calls you back.

What tips do you give to those early in their community radio careers or who are looking to be more involved?
Community radio is only for the independent and enterprising, so discover what you can offer and get good at what you do. There really is always room at the top. Radio managers rely, more than you might think, on your coming forward. Cultivate the ability to identify needs and work collaboratively and dependably with station leaders. This opens doors for opportunities for support and funding. And remember, this is a great global family and tradition; the people in community radio are a great and generous resource.

Are there problems you hope the next generation of community radio leaders can solve?
Community radio has lost much of its traditional funding strategy, on-air pitching. New and diversified business plans are needed.

Reaching the next generations. Many younger people do not know how or where to listen to radio.

In these politically polarized times, with the decline of public space and discourse, community radio must work harder to establish agency.

Rising to the challenge of adequately covering climate crisis.

If you could go back in time, what advice would you give yourself when you first started?
Expect more rewards than you know to ask for.

Dream big but discern what is possible and what is not.

People do a lot of weird things not worth getting mad about. Get used to working with all kinds, whether you like them or not.

Go to the radio tower.