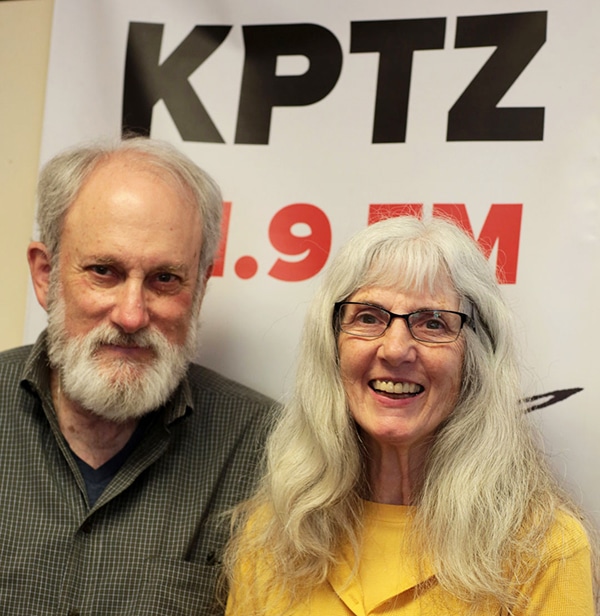 This profile appeared in the July NFCB newsletter. You can subscribe here.

Station Manager Kate Ingram of KPTZ recently led the Port Townsend, Wash. radio station through a successful capital campaign that featured an anonymous $100,000 donation and the station reaching its million-dollar goal. From 1990-1999, Ingram was program director of the University of San Francisco’s KUSF, but she has a lifetime of radio experience, including at stints as music director at KFRC, San Francisco (1982); WCOZ, Boston (1981); WBCN, Boston (1979 – 1980); and KSAN, San Francisco (1978 – 1979); as well as assistant music director at KSJO, San Jose (1977).

Since FM began, as a listener I always knew of the “left end of the dial” and it became more familiar when I was music director at WBCN Boston, because the 3 college stations in Beantown had become the home signal for BCN’s air staff during the strike in January 1978, when new owners fired all of the support staff in the middle of a big winter storm, and everyone who worked there walked. The listenership of college radio NCEs WERS, WMBR and WZBC grew so much that soon BCN’s owners hired everyone back, and the station shot to #1 in the ratings. At that time the local, national and international music scenes were super dynamic and those stations became feeding grounds for both WBCN and WCOZ ’s (the dominant FMs) playlists.

Later, in 1982, I’d moved back to San Francisco and was music director at KFRC. College / community station KUSF at the University of San Francisco asked me to be their professional advisor, at a time when lots of good radio was being made and played at 90.3FM ~ winning numerous awards and with many student staff moving into music industry positions.

Eventually, after working most of the 1980s in video production and music licensing, I circled back to become program director of KUSF for the 1990s. Both the early 80s and the 90s were prominent years for that station’s listenership and influence. During that decade I was happy to attend two NFCB conferences, both in Seattle. A foreboding of my later move to the Pacific Northwest!

How did you get involved with KPTZ?

I left northern California by way of a detour to roots in Raleigh, NC and moved to Port Townsend in June, 2016. Coincidentally, at that exact time the station was seeking a general manager. The Board ended up not hiring anyone then, so I started volunteering and gradually worked into my current position as manager.

When did you know you were hooked?

Hooked on radio as a teenager, the old 1960s transistor radio / earplug under the covers to listen as many hours of the day as possible. Hooked on commercial radio beginning in 1974, right out of college starting in Raleigh, NC as an AM megastation copywriter, leading to life as a radio gypsy to work in music programming at many stations nationwide, until the demise of free form on the FM dial, around 1980. Then once I landed at KUSF, the appeal of community radio won my heart for its responsiveness to the otherwise underrepresented population.

I love the radio station setting and the challenge of managing by consensus, in order to be a reflection of the local community that leads through entertainment and information. The other appealing aspect is to develop and maintain a positive creative working environment that includes and serves the broad spectrum of volunteers who are inspired to participate in this worthwhile community service. It’s a calling for me.

Why is the station (KPTZ) so special to you?

KPTZ is widely considered to be a gem of the local community. One of the outstanding attributes of the Port Townsend area is its culture of volunteerism, so that there is an active base of good, conscientious people truly invested in community enrichment through their service contributions.

Thanks to this volunteer spirit, KPTZ is able to staff its functional requirements for quality programming 24/7 with high calibre individuals. As a reflection of Jefferson County’s makeup, wherein a third of the population is age 65 and over, station staff includes many recent retirees who bring professional standards to KPTZ’s volunteer environment ~ including a number of broadcasting veterans. The area population is highly self aware and thus the service of its local radio station provides a constructive forum for residents to explore creative solutions to issues ranging from climate change, educational quality, and fulfilling the needs of low income families and individuals.

Local area schools have an outlet for student participation through KPTZ’s programming, and station operations model a professional workplace engendered on behalf of mentors and trainees alike.

KPTZ has the most amazing staff, people who are super committed to excellence. This is certainly a reflection of the local community, itself highly committed to volunteerism and high quality of life.

KPTZ recently organized a wildly successful capital campaign. How was it organized and why was it so effective?

Since KPTZ originally went on the air in May 2011, the station has long since outgrown the 800-square foot repurposed school portable that houses the entire station, including the office, engineering stack, and 3 small studio rooms for production, performance and broadcast. So the need to move has been increasingly pressing.

After looking into a couple of other alternatives, KPTZ’s Board chose the option to move to the growing cultural mecca at Fort Worden, both a Washington state park and a rich organization of partners ranging from Centrum and Peninsula College to the Port Townsend School of Woodworking and PT School of the Arts. At the same time, Fort Worden is developing a new center for the arts. totally remodeling and refurbishing the set of buildings that were originally built as part of the U.S. Army fort stages of the campus.

Our Board President Robert Ambrose moved to Port Townsend from Talkeetna AK, where he had spearheaded successful campaigns for both KTNA, his former station, and establishing the local hospital facility. Robert, who hosts KPTZ’s “Rhythm Connection” program (which he has continually produced for 25 years), was not shy to lead the Board as numbers exponential to any prior station fundraising goals began to be floated, as projected construction costs.

As it turns out, now that we have accumulated all but 10% of the latest $1.2M projection, the original number being tossed out was less than a third of the total we have just accepted as the final bid for the construction project. (This includes not only the new studio and office space, but also the cost of purchasing the current transmitter site.) All the while, Robert has remained unwavering in his belief in our ability to bring in the needed funding. I’d venture that this steady approach brought the needed mojo.

Indeed, much of the success, in retrospect, has come from asking sincerely. The first breakthrough came last fall, when an altruistic funder who has also been supportive of other Fort Worden developments, offered $500K to help us reach our goal. Robert asked the head of Sage Foundation to make this contribution a two-for-one match, so that by raising $250K this would yield a total of $750K raised.

Subsequently, in a very well-directed year end appeal request sent to KPTZ’s email list (an adaptation of this letter can be read here), a number of donors responded, including one of our volunteer DJs, who amazingly pledged $100K. While our heads were spinning to re-organize the campaign and go public earlier than expected, the momentum was palpable. We redirected our 1-Day popup fundraiser on Valentine’s Day from feeding operations instead to ask for tripled match donations, bringing in an astounding $22K for that event.

What important lessons did you take from the campaign experience?

The importance of donor relations! Truly a key to fundraising success, especially continued sustainers who otherwise can become overlooked.

The station took on the mantle of and embraced being the “little station that can.” One factor that we had not incorporated into prior fundraising is that of receiving donations of low basis stock. By opening a brokerage account, we were able to receive contributions of shares that would have otherwise, if sold, meant the donors incurred large capital gains taxes. Instead, they received the tax write-off of the gross stock value the day of the transfer, and as a nonprofit, selling the shares brought cash (being tripled by the Sage Foundation match!) towards the campaign goal.

What was the biggest challenge you faced with the campaign?

Probably lack of time, and lack of prior experience with larger, capital campaign fundraising.

How did you overcome the challenge?

We just did it! Robert carried on effectively by making contacts, and had help with writing and submitting three pivotal grants. He also was advised by the previous Board president, who had led the station as a founder. And we capitalized on the momentum, beginning with an early on grant success from a local financial institution, then buoyed by the large match challenge and resulting donations.

Any tips to offer stations considering such a campaign?

Just do it! Don’t be afraid to ask! Just as we discovered, there may be donors wanting to take advantage of the stock donations who are keen to support the local station that then supports so many other worthwhile causes in the community.

What’s the secret for staying excited about community radio?

Listening to KPTZ is one of the pleasures that comes from running the station. It’s an inspiring joy to hear and see such dedication as our awesome staff leads consistently exemplify the strong spirit of connection and interdependence. These qualities continually compel and uplift.

Also the amazing work of NFCB being available to each of us kindred spirits, makes a huge difference. Seeing people at the conference and following the informative listserve postings demonstrates what to do to better at effective leadership, and for broadcasting to contribute to the world around us.