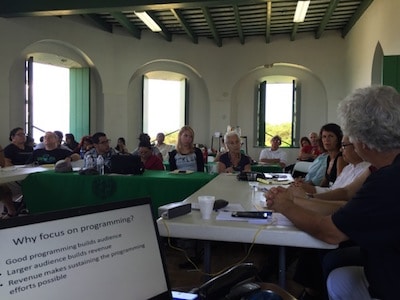 Over the last week, my work at NFCB took me to Puerto Rico with my colleague Ileana Rivera Santa. Ileana is Director of Latino Station Services for the Latino Public Radio Consortium (LPRC). NFCB partners with LPRC to deliver a spectrum of services to LPRC stations, so this trip was filled with workshops and meetings at WIPR and WRTU in San Juan, and Radio Vieques on the island of Vieques (just off the east coast of the main island).

This sampling of stations gave me a full view of the public broadcasting system from the large dual licensee PBS station of WIPR, to the University of Puerto Rico licensee WRTU, to the small community station on Vieques. Though the stations each have their own focus, priorities, and organizational cultures, a number of characteristics were the same and, I believe, part of the fabric of life in Puerto Rico. Namely, the people were generous with their time, devoted to participating in something that serves “the greater good,” and graciously hospitable in every way. To relay all the details in this short blog post would be impossible, so I’m going to focus on Radio Vieques for this post.

Housed in Fort Count Mirasol, which was built in 1845 by the Spanish Governor to serve as a jail and house the militia, the space is now restored as a Museum and holds art collections, a gift shop and community meeting space. Radio Vieques was conceived in the midst of a nonviolent struggle to remove the US Marine presence that had included munitions testing and storage for 65 years, displacing agrarian peoples and poisoning the land. Without a single bullet, the brave people of this island achieved their goal in 2012. Radio Vieques has been broadcasting for the last two years.

Our task was to help them map their way forward as a community resource after having been organized around a struggle that had entered a new phase. I wish I could say that struggle was over in that last sentence but it is not that simple. The people of the island are suffering from cancer rates that are ravaging the population of about 10,000 and economic conditions that would make your hair stand on end.

Through the airwaves, this intrepid community radio station shares information, helps coordinate group efforts in education and public health, and lifts spirits every day with diverse music programming from around the world. Off the airwaves, Radio Vieques is partnering with other organizations on the island to tell the story of Vieques through art, education, and commerce.

All of this happens on about $60,000 a year. Even though resources are scarce and growing the revenue base is a critical challenge, there was no hesitation in the workshop when I asked them to describe the significance of this community resource. Participants offered up words like community, liberty, love, inspiration and hope. 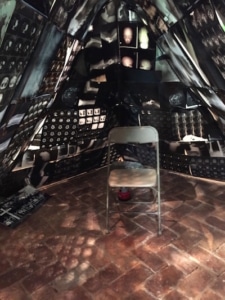 At the end of the day, I took a moment to absorb an art installation that had a small hurricane structure constructed of x-ray images of various cancers that people were dealing with. As I sat inside the small structure and the light penetrated through the x-ray pictures in a strange kaleidoscope of shapes and sizes, I was reminded of the power of the work that we do.  I was reminded of the stories that are buried unless people have the courage to find their voice and speak their truth.

My thanks to Ileana and our compañeros in Puerto Rico. There are fountains of inspiration everywhere in community media – it just depends on where you want to set your eyes and what you let your heart see.