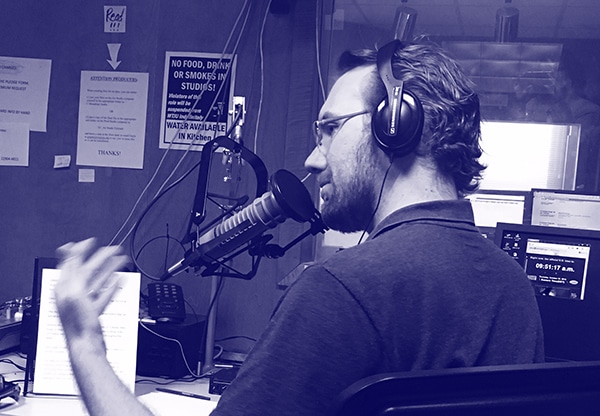 This interview appeared in a recent NFCB monthly newsletter. You can subscribe here.

When NFCB Board Treasurer and WTJU General Manager Nathan Moore was a teenager, he watched a movie called Pump Up The Volume, in which Christian Slater operates a pirate radio station out of his basement and later his Jeep. Nathan says he had neither a radio station nor a Jeep, but thought that looked “cool as hell.” Twenty years later, he works in non-commercial radio. Moore still does not have a Jeep, but did answer some questions about community media.

What has kept you motivated for so long in community radio?

It’s kind of crazy — this is now my 20th year working in college and community radio, and I’ve had a lot of motivations for that work over the years. Sometimes it has been the sheer fun or sense of purpose in creating something beautiful or thought-provoking. Sometimes for the challenge and joy of empowering and guiding others to do the same. Sometimes, I’ve been driven by a Gramscian impulse to change the status quo through media.

But the constant that keeps me going is summed up well by an old Vonnegut quote: “The most daring thing young people can do is to create stable communities in which the terrible disease of loneliness can be cured.” We live in a world that is at once interconnected technologically yet deeply atomized socially. There are few institutions that bring people together in genuine communities. Community radio stations can serve as some of the best institutions to do just that.

What keeps me going is an urge to nurture my community’s sense of itself — using music and conversation to help people feel connected to one another and to actively, constructively participate in our community. The medium of radio happens to be one really good way to do that, and it’s a medium I really like working in.

In working with students, what insight have you gained about what attracts young people to radio? What do college students find most interesting about radio?

WTJU’s student-run sister station, WXTJ 100.1 FM, is only a few years old, so it’s been really interesting to watch it form brand new traditions from scratch. What brings UVA students in the door is often a passion for music — especially music that’s a little more on the fringes. As students settle into WXTJ, they find a creative community of people who are also into music, arts, and all manner of creative endeavors.

What I was genuinely surprised by was how the students use the term “radio” in a more expansive way than I’m used to. “WXTJ” and “WTJU” are the broadcast stations we run, but for the students here, “radio” means broadcasting plus an entire community of people, house concerts, art shows, an annual concert in the UVA Chapel, and more. Being part of “radio” means all those things, not just DJing. I think that student-driven community centered around music and arts, with actual broadcasting as an organizing hub, is what the students are really after. Finding a place to belong and nurture creative possibilities.

How has working with college students changed the way you talk about and relate to radio? You teach students about radio, but what have they taught you?

The biggest thing is that it makes me not let up on the gas. The media landscape has been changing for a long time, and tougher changes (for our medium) are coming before too long. When every car has on-board 4G+ connectivity, with Spotify and Pandora alongside FM, what’s the value proposition of FM radio? On that car dashboard, why do we matter to a listener?

Working with and around young people reminds me every single day to work toward an answer to that question. I see their media consumption habits and priorities. I hear how they talk about radio. They remind me to think about radio more expansively. Spinning great records on FM radio remains very important. But it is not sufficient for the future of this station or this medium.

What’s the best part about what you do?

I have always considered myself a generalist, so the best part is the variety itself. On a given day, I might record an interview in the studio, write a grant, deliver a talk at the University, drive to the transmitter to fix something that knocked WTJU off the air, analyze our latest audience data, and work on plans for our fall concert series. (This combination literally occurred a couple weeks ago.)

Paired with that variety, the best part is getting to try some new things. Some projects and ideas ended up being flops, but others — like that fall concert series — are now signature parts of what we do.

What tool can you not live without in your job?

I use dozens and dozens of different tools in my work, but the most indispensable one is probably my phone. I use it for email, browsing, and phone calls, obviously. But I also use it for WTJU’s social media management, music playing, interview recording, video production, audio streaming, and more. I’ve even used it as a back-up studio-transmitter link in emergencies — playing WTJU’s webstream through the phone and plugging the audio output into the back of our transmitter. (It’s important to remember to turn on call forwarding when doing this trick.)

You’ve worked in very decentralized stations. What advice would you give those who are there and feel really frustrated by such organizations?

There are many ways to structure an organization in terms of decision-making. Different arrangements on the centralized-decentralized spectrum each have their strengths and weaknesses.

Honestly, though, frustrations with a “decentralized” structure are often just frustrations with an organization that has grown stagnant — unable to take a hard look at itself, question everything, re-assess its mission and role in the community, and put the pieces back together into an effective plan for the station to thrive in the future.

No matter what structure a station chooses, balancing the interests of the many stakeholders involved in a community radio station often proves challenging. Regardless of the chosen decision-making structure, the deciders (whoever they are) should:

I could go on and on about what each of these means. But if the deciders center themselves in these practices when approaching tough organizational and programming questions, better outcomes for the station are much more likely.

If the station seems really stuck in a rut, that can be overcome. An effective coalition builder can make a big impact in a decentralized structure — appealing to the very values that make these stations so special.

What do you most wish you’d known when you started this journey?

I’ll be honest, in my teens and 20s, I was pretty gun-shy about fundraising. I went through the motions, and I developed pretty good skills at on-air pitching and membership letter writing. But I didn’t really like it.

People — including many younger people — want to support organizations that are genuine and doing meaningful work in and for their communities. Fewer people want to simply become “members,” but more people want to have an authentic sense of connection. Investing in a station and its content is an extension of that.

Got a good idea that’ll make your station shine? Get creative about involving the community in all sorts of ways — including financial support. It’s part of making this crazy project called community radio actually work for our communities.