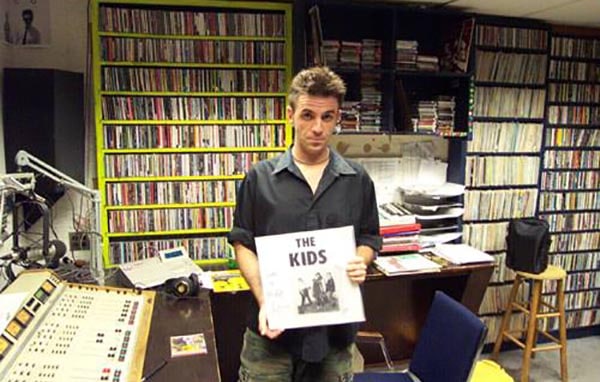 This profile appeared in NFCB’s October newsletter. You can subscribe for free here.

Mike Lupica grew up idolizing the smartassed DJs of Princeton University’s WPRB, who routinely revealed all the best-kept secrets in the universe through obscure music selections and sardonic humor. He snuck his way onto the station’s airwaves as a townie DJ in 1992, and made it his broadcasting home until 2000, when he left to make freeform radio for WFMU, and than later do technical work at WNYC. In 2012, he returned to WPRB as the station’s first Educational Advisor. In 2015, he launched the WPRB History project by curating an exhibit of station artifacts at Princeton University’s Mudd Library, and also creating wprbhistory.org, which documents 75+ years of the station’s history. Over the years, he has hosted programs like “Hip Transistor” and the “Anti-Static” podcast. Presently, he is the host of “The Freeform Pathogen” on WPRB. He is also the founder of WPRB’s Digitization Task Force, which aims to convert the station’s thousands of rapidly deteriorating CDs into hundreds of thousands of FLAC files.

You have a long history in radio. What skills did you acquire that best prepared you for your current role?

I’ve been a community radio listener since the mid-1980s, but didn’t begin volunteering as a program host until 1992. At that time, radio was a mouthpiece for my own cultural obsessions with the aim being to reveal as many new musical discoveries as possible per week. I was for years a near-ubiquitous presence at late night gigs in NYC and in front of every used record bin within a 30 mile radius of my apartment, so not surprisingly, this was a pretty exhausting period of my life. It wasn’t until 2000 when I was hired as WFMU’s Special Events Director that radio became the focus of my actual career. FMU was utterly transformative for me because in addition to being responsible for my own interests, I was now also expected to help enable a staff of unruly weirdos and eccentrics realize theirs as well.

In addition to hosting a show and auxiliary podcast during my eight years at FMU, I ran fundraising events (including the station’s fabled NYC Record Fair), and also booked benefit gigs, launched DJ workshops, edited print materials, archived thousands of hours of programming for on-demand listening, helped implement crazy fundraising strategies, and even served as the interim building manager when the boss was out of town. That level of small business responsibility, coupled with the much broader sense of staff-wide engagement than I’d had previously, is what set the stage for my role at WPRB. I routinely draw upon the management experience I earned at WFMU to propel things in a progressive direction here in Princeton.

What is one thing you had to change about yourself or your approach in doing this work?

WPRB isn’t owned by Princeton University (a non-profit board of alumni trustees are the license holders), but at its core, it still has an educational mission. Which means that working with a new student staff each year involves frequent resets of their collective knowledge base. As the only member of a management team who doesn’t graduate and move on to other life pursuits, this was initially very frustrating for me. But after a few years at WPRB, I realized that the station’s trajectory was definitely on an upward climb and I’ve learned to accept that change here most often happens incrementally rather than in linear leaps.

What have you come to appreciate about community radio that you initially took for granted?

I’m in love with the extent to which community radio’s participants are willing to share their own successful strategies with others. Unlike many industries and even including many arts organizations, there’s a corporate mentality of guarding secrets which are deemed ‘precious’, or thinking of peer stations as competitors rather than potential allies or collaborators. With that attitude, community radio stations run the risk of becoming very insular realms where old guard traditions can create barriers to newer and more adventurous strategies. As such, we’ve worked to forge relationships with other stations—whom we see as fellow travelers—and the outward gaze has done wonders for our perspective.

You chose to create a station archive. Why make that kind of resource intensive choice?

The WPRB History Project was inspired by the amazing work done by Laura Schnitker at WMUC and Jennifer Waits of Radio Survivor. Their guidance and encouragement was a key factor in my own project’s success and I think they understood that my goal was to put WPRB’s history to work as a hands-on listener engagement tool. I respect and admire the more academic efforts to preserve radio history, but those paths still seemed off-limits for an anarchic arts organization like WPRB, and that’s something that also guided our eventual approach.

In 2015, after attending a conference at the University of Maryland (where I met both Laura and Jennifer), I came to understand that PRB’s history was strewn around the station in the form of old photos and handwritten playlists crammed into dusty file cabinets, and on vintage 1/4″ reel to reel tapes decaying in the tech closet. Two of my primary takeaways from the 2015 conference were that A) a DIY rescue of these important materials was entirely feasible, even on a shoestring budget, and B) acting quickly and boldly was a necessity, since all legacy materials will eventually reach a point of decay that’s beyond all hope of repair.

At the time, WPRB’s 75th anniversary was rapidly approaching, and that seemed like a cosmic sign from the broadcasting gods that the timing for the opportunity was perfect. As such, I leapt headfirst into the task of organizing and scanning all of the ancient documents and photos as well as digitizing the recorded history of the station from the old reels. The materials uncovered in this process defied all hopes and expectations: Long-forgotten interviews with criterion PRB artists like Sun Ra and Sonic Youth, promos for decades-old station events and programs, and so on. In order to flesh out the backstories on these materials, I tapped into the hivemind of the WPRB Alumni Facebook group and gave the huge amount of data generated by those conversations a publicly-accessible home at wprbhistory.org. We also partnered with Princeton University’s Mudd Library, where I curated a physical exhibit of station artifacts which was open to the public for nine months, and which was augmented by an opening and closing reception, an alumni banquet, and a mini-record fair with live music and DJs.

By acting as the curators of our own history, we’ve discovered that our listeners are even more thrilled than usual to support an organization with a clearly chronicled legacy of great stories. In the subsequent years, it’s been a huge honor for me to speak about our archival efforts at radio conferences around the country and encourage other stations to do this important work.

WPRB is freeform and may not have the same budget stresses as the average station has, but you have seen this space evolve, too. How can freeform programming be sustainable in a time of segmentation, so much so that, to most listeners, content is producer-driven, diverse and expansive already?

The freeform spirit has always animated the station’s best programming, even going back to eras of conservative conformity like the 1950s. I’ve discovered airchecks of student DJs from that era putting weird effects on their voices and pulling bizarre on-air stunts. That kind of experimentation set the stage for later years when DJs were eager to mimic the style and traditions of freewheeling hosts like Jean Shepherd, Alison Steele, Rosko, or Dan Ingram. The DIY/punk ethos also had a major impact on the station’s culture in the 1980s and 90s, and the passion of those scenes drove WPRB’s DJs into a kind of informal competition of who among them could find the most obscure or challenging material to work into the station’s airsound. Such endeavors might be programmatically suicidal for some stations, but PRB is fortunate to have a very large broadcast footprint upon an area that includes a major metro market. As such, we’ve spent years building the support of a listenership that expects their boundaries to be pushed.

That said, the internet has changed the entire way that many people listen to music— algorithms and paid tastemakers being among the lead influencers. A lot of blood has been lost by radio people fretting over how best to deal with the changing realm of music discovery, but my feeling is that adventurous curation by a committed and engaged host can always find an eager audience. Strictly by the numbers, it’s true that radio is not the powerhouse that it once was in terms of driving trends and artist popularity. But I also believe that the existing audience for challenging programming is deeply committed to the spirit of community radio, and that there’s major growth potential for anyone smart enough to see through the haze of corporate lackeys, Spotify “influencers”, and music industry stooges who are merely pushing product. For my money, none of that can hold a candle to real human curation from someone who’s in love with what their doing, and I believe stations that match their most ambitious hosts’ enthusiasm with great, online listener engagement tools will be the clear winners.

Given the current ease of making media, why does radio – with its regulations and position as legacy media – still appeal to young people?

I think an easy answer would be to say that it’s because they just think radio is weird and retro, but in an environment like WPRB (where the station management and 50% of the airstaff is comprised of student-age DJs), I would also argue that radio has an enduring romance that can’t be matched by other outlets. In my experience, even radio’s youngest practitioners who take the time to seek out that romance and see themselves as somehow being a part of it have no trouble at all understanding what separates radio from other content delivery systems. It’s a well-known mantra in community radio that “audiences don’t happen by accident”, so when we’ve got a staff of 20 year olds who are eager to jam their shows with artists like Palberta, Crazy Doberman, and Human Adult Band (and earn rave calls from listeners who are also of student age for doing so), the future seems brighter than it did a few years ago.

What is one thing in community radio that may be going out, but you think will always be cool?

If you could go back in time, what advice would you go back and give yourself when you first started out?

Never, ever sleep on the couch in the station lobby.