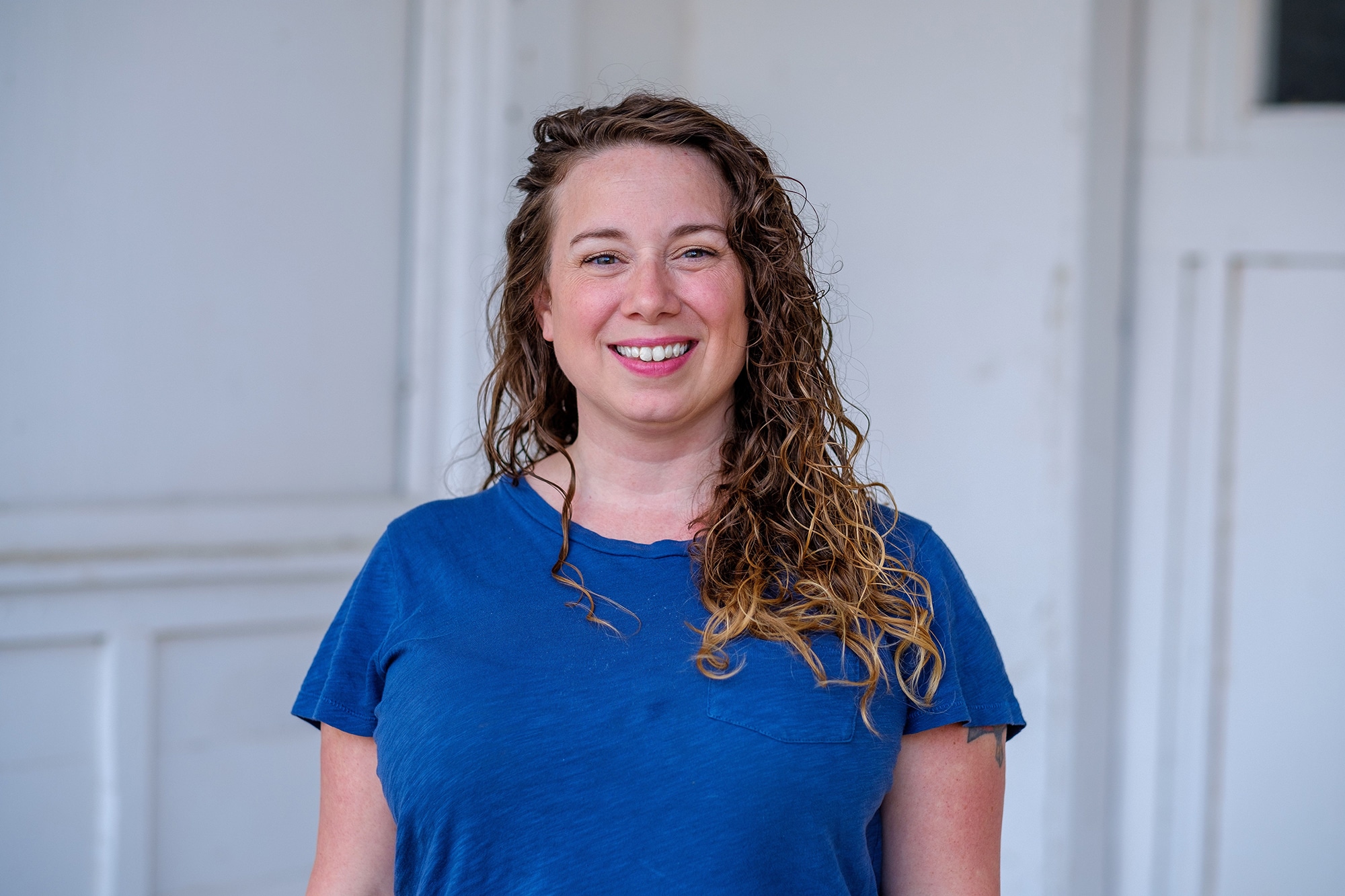 This profile appeared in NFCB’s monthly newsletter. You can subscribe here:

How did you get here?
I had no background in radio before I came to Marfa Public Radio. I started out in the music and theater industries. I was in professional theater for 12 years. And then I was a venue owner and a booker and producer of live music performances for many years. And also, a pedicab driver. But I often listened to Marfa Public Radio before I moved here, I visited a lot of times, I had a friend that was a DJ. And I had gone on to the website to listen to a music show and saw the job posting from my position. And so, I applied. Within two weeks, I was living in Marfa. It was a quick transition. I was living in Austin. And I have a partner who stayed behind in Austin for two months, because he had a job there and we needed to transition into living in West Texas. But I’d wanted to live in West Texas for a long time, and saw this as a good opportunity to move here.

What was the most interesting part of that change?
There’s nowhere to live. There are no rental properties, really. It’s all Airbnbs and expensive houses. That was kind of jarring, because you think, ‘oh, you just go and live there, because there are jobs,’ it didn’t occur to me that there’d be a shortage of housing. That was the biggest change from leaving a big city and coming here.

What was your jump into radio like?
It turns out that if you do a bunch of weird jobs before you work in public radio, inevitably, one of those skills will be utilized in your time in public radio. My very first full day at the radio station, a 30,000-acre wildfire broke out. So instead of learning the employee handbook, or where the staplers are kept, I learned to answer the phone and keep spreadsheets of people offering horse transport and temporary housing and all kinds of help for their neighbors during the wildfire. And then calling people that needed resources and connecting them, then making sure the reporting team had all the latest updates as they were coming in. It was a wild way to get into public media, but on some level, it was the best way because I got to see my community being a community and being there for each other instead of all the small-town stuff that sometimes happens. Also, it bonded me to my co-workers almost immediately because we were going through something really intense all at the same time.

What was an average day, before COVID, for you?
Great question. It feels like so long ago. I would usually come into the office an hour or two before everyone else because it’s the quietest time of the day. I would get a lot of emails, office tasks and paperwork done. And then my day was dedicated to shifting through everyone else’s schedules. So, meeting with the executive director and seeing what was on the table for big projects we were dealing with, and then meeting with fundraising to figure out what needed to be done there. It was constantly changing throughout the day, and I would probably pull like a 10 hour day most days. And it would fly by because there’s so much to do.

What is it like now?
I get up early in the morning and make coffee and hang out with my dog and check on my pandemic chickens. And then I ease into the workday slower now. There seems to be a lot more structure around what my co-workers need, because of the necessity of being in a virtual world. I go to the station about once a week, but most of the time I’m at home. I have a couple of virtual meetings, and then I have the ability to work around the day as I need. It feels a lot more productive in a strange way, although I do miss the hustle and bustle of being around everyone.

Has there been a lot of challenge for staff with being separated from the station so long?
When the pandemic first broke out, and I’m sure this is not unique to us, we had never done work from home. We weren’t sure how that would work. Our town was one of the first in Texas to go into shelter in place. So, I found myself going from planning our spring membership drive, to figuring out the internet and equipment and needs for each of the staff members to work from home. For example, how do we broadcast when there’s a curfew? We also onboarded two staff members in the beginning of the pandemic, and it was really challenging to figure out how to train them and bring them into the station culture without making them feel isolated or alone. We’ve started to find a groove with scheduling staff one day a week to be in the station and staggering when people are there. There’s a little bit of interaction and virtual meetings to kind of keep everybody in touch.

Is there anything you’ve learned about yourself in this time?
I knew I was a very social person before all of this and that I kind of feel energized by being around people, true extrovert tendencies all the way around. But I learned that I thrive in a solo work environment, which I never would have suspected. And while I miss all my coworkers and I look forward to the day that we can all finally have lunch together, I’ve learned that it’s easier for me at home to turn off work at the end of the workday, unless there’s an emergency, in a way that I didn’t before.

How was that adjustment?
It was not smooth at all. The first couple of weeks. It was hard to know when to work and when not to work. It was hard to know what was an emergency and wasn’t because everything felt like an emergency. And then I found myself having a lot of doubts in myself a little bit – like, am I doing the best that I can do? Am I hitting all the things that I’m supposed to do in my day? Am I achieving? Am I being a successful team member for the rest of my staff? I think that comes from having verbal and physical cues that you’re on the right path. When you’re working with a team in a room together, you have the opportunity to make eye contact and shake your head and thumbs up. We thought that at the beginning, ‘three months tops, we’ll be good.’ Now it’s a year later.

Is there anything during this period that you feel most proud of?
I feel most proud of how our team has risen to the challenge for the listeners in West Texas. We cover an area the size of South Carolina, 30,000 miles of broadcast range. There’s an immense challenge to cover during a pandemic. The two regions that we cover that are so vastly different: the Permian Basin, which is largely oil based and experienced a bust in the beginning of the pandemic, and then the Big Bend, where we don’t have access to medical services. So, I’m really proud that we have been able to find a way to serve everyone at the best of our ability.

Is there anything that’s coming up for 2021 that you’re excited about?
Of course, going back, hopefully. Seeing people would be amazing. Just being with the staff for one of the membership drives. I know it’s like, no one wants to do membership drive, because it’s a lot of work and stuff. But I just missed the energy of being in the studio with everyone, I miss the energy in the station. I miss engaging with listeners. We’re radio, and it often feels like we’re just blasting stuff out to people. But it’s nice to have those times especially in a small town like Marfa where you can just open the front door of the station and people can come in. Minerva brings us lasagna. Other people bring their $20 check in that they bring every year, and they physically want to walk it in. They get to see where Carlos Morales sits in Studio A. I love that so much about drive. It’s hard not to be able to see everybody and not to get a chance to hear about their lives and talk with them. You get to know those folks, and when you don’t get to see them, it’s kind of sad.

Do you have any personal goals for this year?
I do. I want to really focus on my professional development. I feel passionate about what we do, and I want to stay in this industry for a long time. I want to learn how to be a better leader. I think a way to do that is to find a mentor, along with taking classes or attending workshops and calls with other people in public media to learn from as many as I can. Also, I want to learn how to be a better ally and leader in regards to the DEI commitments our station has made for 2021 and beyond. Public media has a long way to go towards being completely equitable and accountable.

Also, I’m really trying to force myself to slow down this year, because something the pandemic has taught me is that having quiet time, having time with my family, having time with my chickens, that kind of stuff, personal fulfillment is just as important as career fulfillment. That’s something that before the pandemic, I never really gave myself a chance to do. I didn’t prioritize myself that way. This year is the year of boundaries. I’m going to read some books, I’m going to play some music and have quiet time in each of my days.

Last question: if you had a theme song, what would it be?
It would be “I’m So Excited” by the Pointer Sisters. Because that’s me all the time. I really love to see other people happy. I love to see other people enjoying themselves. I like to connect people. I like to champion people from the sidelines. And I love that song. I also think my friends would say that’s my theme song.