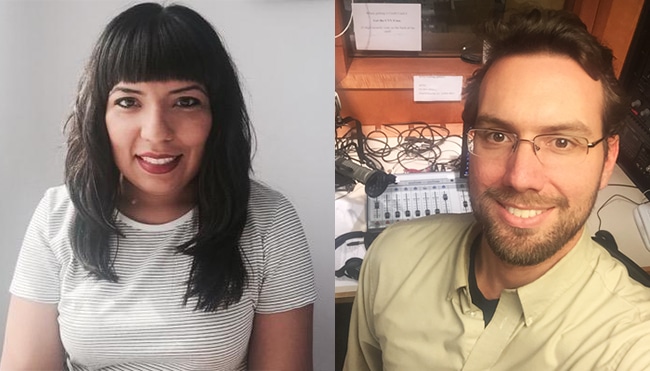 NFCB welcomes two community media innovators to its board.

The National Federation of Community Broadcasters is pleased to announce Adriana Gallardo and Nathan Moore have been selected as new members of its board.

Adriana Gallardo is an engagement reporter at ProPublica based in New York City. In this role she works alongside traditional reporters to fuel the reporting process with communities- ideally the most affected by the story. As the network manager for AIR’s Localore: Finding America, she led a national series of 15 multimedia and community projects at NPR/PBS member stations. Before joining AIR, she traveled the country as a facilitator with the StoryCorps booth, collecting more than 400 local stories.

In her hometown Chicago, she spent over a decade working in journalism as a print writer, online editor at Remezcla, and radio producer. She served as director of youth media education at the National Museum of Mexican Art, cultivated media programs for After School Matters and co-founded the Vocalo Storytelling Workshop (Chicago Public Media).

Nathan Moore is the General Manager at WTJU Radio at the University of Virginia in Charlottesville. Nathan has worked in college and community radio for more than half his life, including Pacifica Radio, Free Speech Radio News, and WORT in Madison, Wis. In 2013, he launched UVA’s student-run station WXTJ, WTJU’s low power FM sister station where he serves as staff advisor. He is also developing TEEJ, a Charlottesville/UVA-based podcast network.

The National Federation of Community Broadcasters is honored to welcome these trailblazers to its board of directors.